Blog
You are here: Home / Blog / strategy / Helping your brain help you win 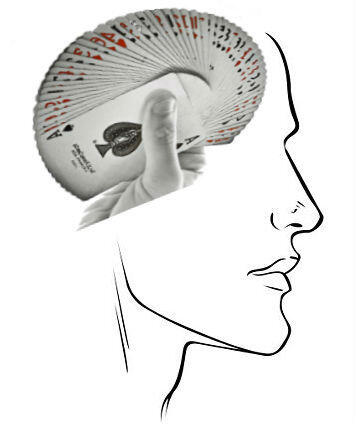 The brain; by far your biggest ally at the live tables, with lady luck a distant second, so it makes a lot of sense to look after it well. But what is helpful and what is harmful to having the old grey matter firing on all cylinders may surprise you.

First a basic anatomy of the brain

Sitting just behind your forehead, or top and front of your brain is an area known as the prefrontal cortex. It’s the most evolved area of our brains responsible for our highest order cognitive abilities, sometimes referred to as executive function and including such things as logic, reason, task flexibility and, problem solving. The prefrontal cortex is also tasked with top down regulation of some other areas of the brain, like the lymbic system.

The  limbic system sits just under the cerebrum, or roughly where the Ace the Spades is in our card focused friend left. It takes care of our more basic survival mechanisms: adrenaline release, emotion, long term memory and the brain’s reward circuit (oh that felt good, lets do it again).

For sound decision making you want your prefrontal cortex calling the shots;  making the big judgement calls rather than being overridden by urges being sent by the limbic system, which is also commonly referred to as the paleo-mammalian brain. You certainly don’t want your caveman brain dictating your gambling decisions. Hit or stand? Hmmm boobs.

There are circumstances, and substances that increase the likelihood of this happening.

A study by Yale University’s Department of Neurobiology found that for most of us, high stress tends to impair cognitive ability.

“Under conditions of psychological stress the amygdala activates stress pathways in the hypothalamus and brainstem, which evokes high levels of noradrenaline and dopamine release. This impairs prefrontal cortex regulation but strengthens amygdala function, thus setting up a ‘vicious cycle’.”

The amygdala and hypothalamus are part of the limbic system by the way. In high stress situations…

“…attention regulation switches from thoughtful ‘top-down’ control by the prefrontal cortex that is based on what is most relevant to the task at hand to ‘bottom-up’ control by the sensory cortices, whereby the salience of the stimulus (for example, whether it is brightly coloured, loud or moving) captures our attention”

We’ve all experienced this. Very eloquent chatting to friends, but when put on the spot to speak in front of 50 strangers we become a bumbling mess, losing our fragile train of thought at a moments distraction.

Combine high stress (big stake on the table) with plenty of distraction (not to mention a couple of the other, below no-nos) and it can be a recipe for disaster. It’s no coincidence casinos are places filled with colour, movement and pretty cocktail waitresses (or live dealers!).

Stay well lubricated (but not with alcohol). That’s the message from a St Louis University Health Sciences Center study that concluded that even mild dehydration can be detrimental to cognitive function and mental performance.

Plenty of material saying that your brain performs worse when sleep deprived. Zero material contending sleep deprivation can be a good thing. Working memory, episodic memory and some aspects of executive functioning all suffer when you don’t get enough shut-eye.

An interesting extension to this is the effects of shift work. A French study spanning 10 years, the results of which were released last year, tested memory and cognitive speed of 3,000 people – both shift and regular hour workers.

Those working rotating shifts performed significantly worse than those who worked regular hours. Those who had worked irregular shifts for more than ten years showed a cognitive decline equivalent to six and a half years worth of natural age related decline!

Exactly how shift work impairs brain function was not understood…only that it clearly did. One theory put forward was that shift workers get less exposure to sunlight and Vitamin D which is known to be beneficial.

Plenty of sex is good for your brain.

At least it’s good for the brains of mice whose brain function and bonking seem to have been extensively tested.

In 2013,  a team from the University of Maryland found that middle aged rats allowed to have lots of sex showed signs of improved cognitive function and hippocampal function (memory benefits) compared to those who had to go without.

Results of a Korean study release the same year showed that sex (again for mice) increases the production of new neurons (neurogenesis) in the hippocampus.

A study published a couple of years ago in the Journal of Sex Research concluded that the viewing of pornographic images does interfere with your  ‘working memory’, or your ability to mentally juggle and pay attention to multiple items. Not a huge surprise. There’s the old caveman brain coming to the fore again.

“…offered little, if any, convincing evidence to support their perspectives. Instead, excessive liberties and misleading interpretations of neuroscience research are used to assert that excessive pornography consumption causes brain damage.”

Millions of men around the world breathed a collective sigh of relief.

We know that being pissed doesn’t help you make astute choices. At the point where you’re are struggling to tie your shoe lace you’re certainly not going to be making optimal game play decisions. Why do you think cheap/free drinks are made available at some casino tables?

Alcohol does have an upside though according to the Whitehall II Study which correlated brain function and drinking habits of around 5,000 UK adults.  What they found might surprise you.

‘for middle-aged subjects, increasing levels of alcohol consumption (approx. 30 drinks a week) were associated with better function regarding some aspects of cognition’

This isn’t the first study suggesting moderate alcohol consumption is good for your brain. But it was the first to control for things like social position, and physical health which may have distorted the results of previous studies (ie moderate drinking tends to be a marker for good mental and physical health and for high socioeconomic position, all of which increase likelihood of good cognitive performance).

So have a glass of wine or two each evening. Just not while you’re playing!

Not a scrap of support from the neuroscience fraternity here. It clouds your judgement during the high, and more worryingly has long term negative impacts on your cognitive ability. It’s highly unlikely any members of the MIT blackjack team that caused headaches for Vegas casinos in the 80’s were stoners.

Cocaine messes with your brain’s communication and reward system. It causes an abnormally large release of  the neurotransmitter dopamine (ecstasy, mushrooms and LSD increase serotonin levels) while at the same time blocking serotonin, dopamine, and other neurotransmitters from being reabsorbed.

As a result, your brain is flooded with feel good chemicals, dopamine in particular, giving you a heightened sense of energy and alertness (a good thing), an elevated mood (other parts of your body may not elevate as well as they should) and a feeling of supremacy (always a dangerous thing).

There’s another, longer term effect that cocaine use has on your brain. According to researchers at Icahn School of Medicine at Mount Sinai in New York (published just this month), chronic cocaine use impairs the brain’s mechanism for learning from negative experiences.

This has been conclusively backed up by the antics of Toronto Mayor Rob Ford over the past few years.

So what improves your brain’s cognitive function?

Brain training games or classical music (the Mozart effect)? Apparently not. Certainly not in isolation.

Here are a few to-dos that seem to pop up on most lists.

Diet is also a factor. Here are the foods that top most ‘brain food’ lists you’ll find on the Internet.

But don’t eat too much. According to researchers at MIT there is a positive correlation between calorie intake and neurodegenerative diseases.

When all else fails, chew gum. Scientifically proven to increases alertness and intellectual performance while at the same time reducing stress, and we know that’s a good thing.