An unlimited number of players can play simultaneously at one Casino Hold'em table. Each player can take only one seat by the table.


OBJECTIVE OF THE GAME

The aim of Casino Hold'em is to beat the dealer's hand by getting the best possible five-card hand, made out of the two cards dealt to the player and five community cards.

To add to the excitement, you can also place a Bonus bet that pays out if a pair of Aces or higher is dealt in the first five cards.

To play the game you place a bet on the Ante bet (initial bet). Optionally you can also place a Bonus bet.

After dealing the initial cards you can see the name of your combination displayed on the screen.

Now you have to estimate your chances of winning and to decide whether to make a Call bet and continue playing, or Fold and lose all bets made.

If you have a winning Bonus bet, you will receive a message "CALL to collect your BONUS win!" beneath the CALL / FOLD decision pop-up window. You have to CALL to receive your Bonus bet payout.

By clicking CALL you will continue to play the game and place the Call bet, which is always double the Ante bet. The Call bet will be placed automatically on the Call bet spot.

By clicking FOLD you will lose all bets placed - the Ante and the Bonus bet. When you Fold, you will still see the remainder of the game played out, but you will not participate in the game. You will need to wait until next game round to place your bets.

If decision time is over and you have not made CALL or FOLD decision, your hand will be automatically folded and you will lose all your bets. The traffic lights game information indicator will display the message AUTO FOLDED.

When decision time is finished, the dealer will deal two more community cards (called "Turn" and "River") and will also turn the dealer's initial two cards face up.

To find a winner, the best paying hands are formed and compared for you and for the dealer, using five out of seven available cards.

The dealer must have a pair of 4s or higher to qualify.

You win if the dealer doesn't qualify. The Ante bet is paid out according to the payout table, but the Call bet is returned to you.

You win if the dealer's hand qualifies and dealer's hand is lower than yours. The Ante bet is paid out according to the payout table and the Call bet pays 1:1.

It is a Push when you and the dealer have exactly the same hand. A Push means nobody wins or loses. You get back your Ante bet and Call bet.

When you and the dealer tie, the next highest card that is not part of the paying hand, known as the 'Kicker', determines the winner.

Possible hands from the highest payouts to the lowest:

Royal Flush is a straight flush involving the Ace, King, Queen, Jack and 10 all in the same suit.

Straight Flush is a hand that contains five cards in sequence, all of the same suit, for example: Nine, Eight, Seven, Six and Five, all Hearts.

Four of a Kind is a hand that contains all four cards of one rank and any other card. For example, a four Aces in your hand would be Four of a Kind. Quads with higher ranking cards defeat lower ranking ones.

Full House is a hand that contains three matching cards of one rank and two matching cards of another rank, e.g. three Kings and two Sixes. Between two full houses, the one with the higher ranking three cards wins.

Flush is a hand where all five cards are of the same suit, but not in a sequence, e.g. five cards that are all Clubs. Two flushes are compared as if they were high card hands; the highest ranking card of each is compared to determine the winner. If both hands have the same highest card, then the second-highest ranking card is compared, and so on until a difference is found.

Straight is a hand that contains five cards of sequential rank in at least two different suits, e.g. Nine, Eight, Seven, Six and Five in two or more suits. Two straights are ranked by comparing the highest card of each. Two straights with the same high card are of equal value, as suits are not used to separate them.

Two Pairs is hand that contains two cards of the same rank, plus two cards of another rank (that match each other but not the first pair), plus any card not of either rank. An example of this would be having two Aces and two Kings. To rank two hands both containing Two Pairs, the higher ranking pair of each is first compared, and the higher pair wins. If both hands have the same top pair, then the second pair of each is compared. If both hands have the same two pairs, the Kicker determines the winner.

Pair is a hand that contains two cards of one rank (e.g. two Kings), plus three cards which are not of this rank or the same as each other. Pair is the lowest hand you can be paid out for. Higher ranking pairs defeat lower ranking pairs. If two hands have the same pair, the Kickers are compared in descending order to determine the winner.

High Card is a high-card or no-pair hand is a poker hand made of any five cards not meeting any of the above requirements. Essentially, no hand is made, and the only thing of any meaning in the player's hand is their highest card. 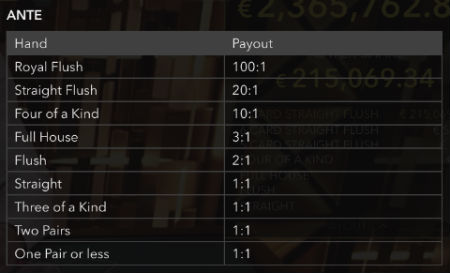 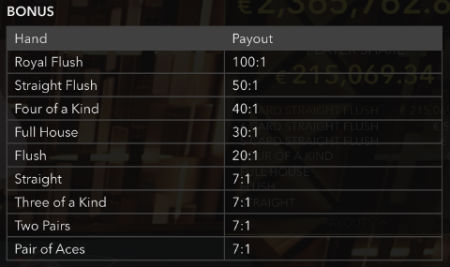 The Jumbo 7 Jackpot bet is available at some Evolution Gaming casinos.

The optional Jumbo 7 Jackpot bet also allows you to win an additional prize of a fixed amount when you personally get a Straight or better!

At the start of a new game round, place your optional Jumbo 7 Jackpot bet in the circular field labelled "Jumbo 7 JACKPOT" after you have placed your ante bet and before betting time expires.

The optimal theoretic percentage return to the player for the: