For a more recent summary of US online gambling regulation, click here

I listened to a very informative webinar the other day, presented by well known US I-gaming analyst  Mark Balestra from Bola Verde Media Group.

The webinar was titled “US I-Gaming Outlook Analysis and Expectations” and it focused on the US online gambling regulatory environments at both the State and Federal levels, including consideration of the key pieces of draft legislation currently on the table and their chances of successful passage into law in the near term.

Set out below are some of the key points (I thought anyway) coming out of the presentation.  They provide a nice broad picture of where things are at, as well as some more context around Barney Frank’s much talked about draft bill H.R. 2267 which was debated by the House Financial Services Committee last week.

Any discussion of America’s online gambling regulatory landscape should start with the currently operative on-point legislation – UIGEA. Passed in 2006 as an attachment to the Port Securities Bill and implemented 1 June 2010, it makes it illegal for payment processors (banks, credit card companies, etc) to facilitate payments relating to ‘illegal online gambling’ between US residents and online gambling providers.

Crucially, UIGEA doesn’t define what ‘illegal online gambling’ is and also places the onus of identifying related transactions on banks/payment processors.  This ambiguity has made effective implementation difficult and the legislation’s success in blocking online gambling activity is often questioned – particularly as the amount American’s gamble online now is similar to the figure in 2006, pre-UIGEA.

It has also proven a headache for local wagering (horse race betting) operations since banks’ shot-gun approach to blocking online gambling transactions is catching their customers’ payments in the net as well.

With UIGEA in place many offshore casinos and sportsbooks have continued to accept US players, but the large, big brand, European based operators remain unavailable to Americans.

We hear a lot about Barney Frank’s proposed new law.  But the fact is, even at a Federal level there are quite a few proposed bills related to online gambling.  At a State level the list gets considerably longer.

Mark Balestra’s slide summarizing what’s on the table (legislation-wise that is) does a much better job than I could do…just click on the below image for the complete matrix. 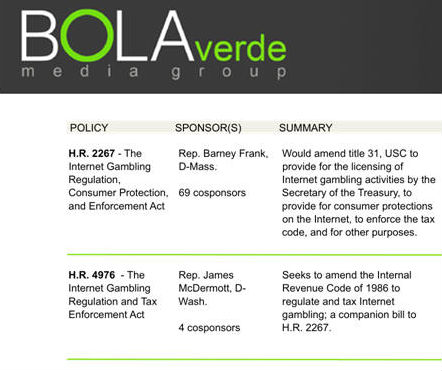 So with all these proposed laws floating around Washington, why does H.R. 2267 get all the attention?

Quite simply it currently has far more support and stands a better chance of becoming law than any of the others.  With a very influential sponsor (Barney Frank), 69 co-sponsors  and the lion’s share (36.5%) of all online gambling lobbying spend  (supporters include PPA, IGC, Harrah’s, UC Group) behind it, it’s the one draft bill that has a realistic (if not probable) chance of success.

For this reason, it’s worth following a little closer than the others.

The Internet Gambling Regulation, Consumer Protection, and Enforcement Act will provide a framework for legal online gambling for Americans provided by US-licensed operators.

What it seeks to do

One of the big misconceptions about HR2267 is that it seeks to repeal UIGEA.  Not so.

UIGEA will continue to operate if HR2267 becomes law however with  HR2267 in place legal online gambling will be unambiguously defined (pretty much all except sports betting) and provision will be made for the issue of US online gambling licenses to successful applicants.

States not wanting to jump on the I-gaming regulation bandwagon are able to so choose and will have 90 days to do so from the time it becomes law under an included opt-out provision.

In simple terms (and from a US players perspective) what this means is that you will be able to play poker or blackjack online with companies (for example, and assuming successful license application) like London Stock Exchange listed Ladbrokes or PartyGaming, rather than your current choice…www.some-unknown-costa-rican-casino.com

HR 2267 has existed in draft form and has been floating around Washington slowly gathering co-sponsor support since the start of 2010.  Just last week its merits were debated by the House Financial Services Full Committee.  On Wednesday (28 July) a HFSC sub-committee hearing was scheduled to discuss the bill’s markup.

Markup is the process by which congressional committees and subcommittees debate, amend, and rewrite proposed legislation before presentation to the House of Reps for consideration.

Where it needs to go

Following markup, the draft will need to be passed by the House Financial Services Committee and put on the agenda for consideration the House of Representatives and then, if passed, go before the Senate where a 2/3 majority vote will be needed before it becomes law.

So there are still quite  few hurdles the bill needs to get over and in betting parlance, each of the hurdles is far from a sure thing.

Likelihood of near term success

Barney Frank has repeatedly said that he wants his new law up and running this year.  But according to Balestra the odds of this happening are pretty long.  Whether he has the level of support to get the bill into the House is questionable.  And if even if the bill is successfully marked up and passed by the Committee, it will get no favors making its way onto the House of Representatives agenda since speaker Nancy Pelosi is not a supporter.

There are obstacles in the Senate too – notably influential Senator Jon Kyl whose stance toward online gambling hasn’t moderated since his persistent efforts to have it outlawed during the last decade – remember all those Kyl bills?

It is also worth noting that this is a contentious piece of legislation and it will always take a back seat to matters considered more important – and America certainly has its fair share of these right now!

However the final point worth making is that while momentum in Washington is currently slow, history tells us that this can change very quickly.  After all – UIGEA took everyone by complete surprise back in 2006. 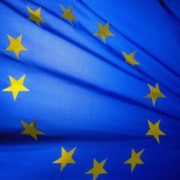 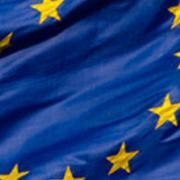 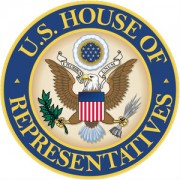