Blog
You are here: Home / Blog / ramblings / Celebrations in Madrid

Big celebrations in Madrid this week.

Nothing to do with football for a change. Evolution are celebrating the launch of their latest live dealer studio which started taking bets from Madrid.

The news was rather casually dropped in the second last paragraph of the CEO comments accompanying the release of their 2022 Q1 results, the headline numbers from which are shown below. 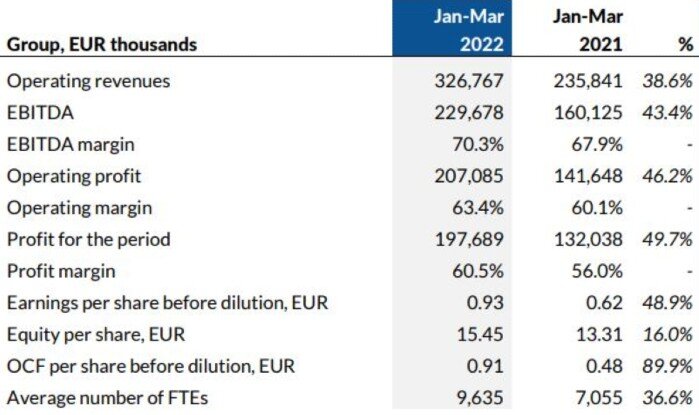 As usual, large increases on the same period last year (yawn). But for a company used to seeing quarter on quarter doubling of revenues, a mere 38% increase may be an indication of major markets starting to approach maturity.

Of more interest was this little gem.

“As I write this we are in the final preparations of Go-Live in our new studio in Madrid and as you read this the first tables are just opening! Also, we are moving closer to open our Yerevan studio to add even more capacity to the Evolution network. A lesson learned during the pandemic years is to not be too dependent on any one studio”

Plans for the Armenian studio had been mentioned in the past. But we missed the news on Madrid.

Evolution have long had a presence in Spain. In 2013 they began streaming action from tables located on the floor of the Casino Rincon de Pepe in Murcia. They have been certified by Spain’s DGOJ (Dirección General de Ordenación del Juego) since then.

A purpose built, dedicated live dealer studio is a step up from streaming in-casino tables though. There was no detail given on the size of the new studio or its table capacity – current or planned.

Meanwhile in the US,

“In North America we continue to expand all our studios, with Connecticut as the next studio to be launched during 2022”