Fast game’s a good game. This seems to be the present school of thought at the bigger live studios, and you can understand why.

Operators certainly aren’t going to complain about players being able to place more bets so it’s fair to say the fast deal/spin tables are here to stay, with more likely on the way.

The latest to appear (earlier this month) is Evolution’s Speed Roulette. Playtech’s speed roulette table has been taking bets since late 2014, and received a face lift around a year ago.

So of the speed roulette tables, which is better?

At the risk of sounding completely flaky and non committal, it really depends on your preferences. The most important thing to note, is that both are European Roulette tables offering the same bets and identical payouts. Return to player rates are identical. 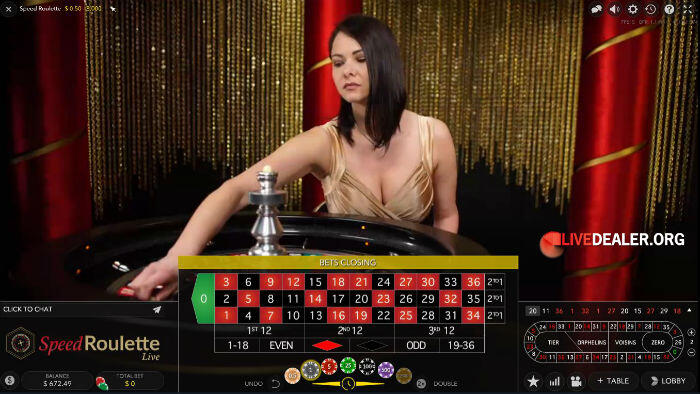 More speed, and many many more camera angles for Evolution’s Speed Roulette. A marginally slower bet/spin frequency, and a camera view that does not change

Now you’ve had a chance to check out the some recorded action from both tables, lets revisit the above 3 factors.

If you like a bit of bling and multiple camera angles  (6 within 30 seconds, best avoided if you’re prone to epileptic episodes), then the Evolution table’s for you.

If you prefer a single video camera view and perhaps a more serene feel then you’ll prefer the Playtech table.

This one’s more objective. On the Evolution table there’s a new spin every 26 seconds. For Playtech it’s around 34 seconds.

This will vary a little from operator to operator. But as a general rule, you will be able to place a lower table minimum bet (€£$0.50) on the Evolution table (compared with €£2.0 on the Playtech table), as well as higher maximums.

Not a lot in it really. At the end of the day you’re choice may well come down to who is spinning the ball, rather than how often they’re spinning it.