Lobby tweaks, new tables and beer most caught my attention in September. 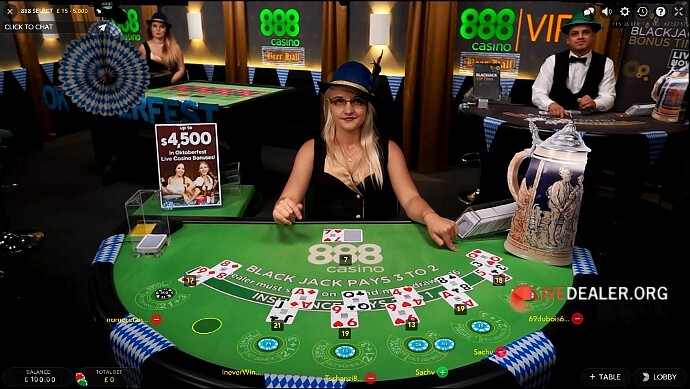 Ever ready at the drop of a hat for a promotion opportunity 888 live casino celebrated Oktoberfest.

Hats were in abundance at 888 tables, but I didn’t see any dropped by tipsy dealers…..alas the steins on the tables weren’t real and never had any beer in them.

The new London based table is presented in the same fashion as the recently revamped Dragonara table, albeit with an extra overhead camera angle. 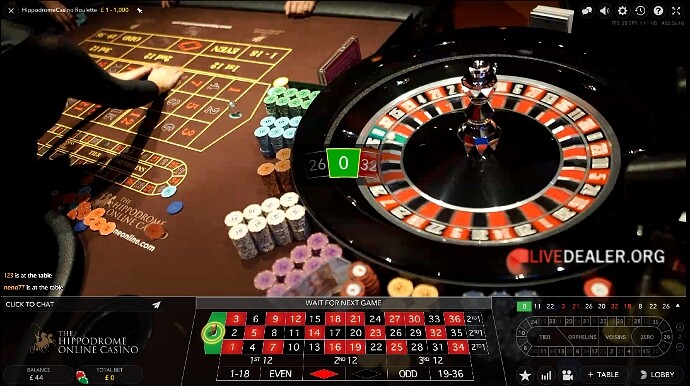 When it comes to table choice the general consensus is more is better. Though I would argue some platforms have too many near identical studio roulette (and baccarat) tables. Bricks and mortar tables are a welcome addition to variety on offer at the big platforms.

Lack of diversity isn’t something that can be labelled at Leo Vegas who continue to add more casino tables.

Evolution’s Ultimate Texas Hold’em table became more widely available in September. Notable casinos William Hill and 888 live being among those whose lobby you will now find the table.

The game is already also playable on mobile devices. 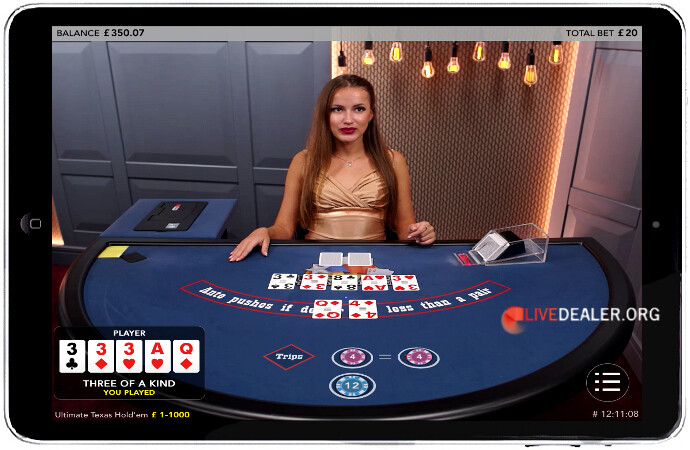 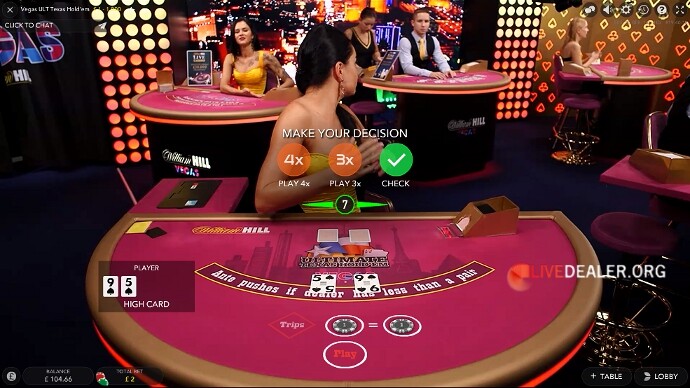 Extra private tables are always great, but I was less satisfied with the choice of location. The Vegas area is frequently too noisy and it can be so distracting if dealers are turning to talk to each other.

Ultimate Texas Hold’em is a game that requires more player thought. At each stage of the game deciding whether to CHECK, RAISE (& by how much) or FOLD. In the limited time available to make your decision the last thing you want is being distracted by dealers engaged in conversation behind them. It’s especially annoying on mobile devices where the decision time is foreshortened by the inherent lag.

With the increased range of poker variants William Hill simplified their lobby by placing all the poker tables under one poker tab, rather than switching between the games. 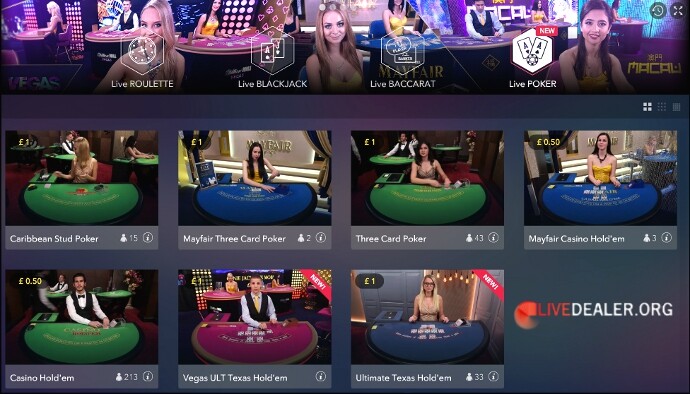 The poker lobby looks impressive with the sheer number of tables and is bolstered now that the Mayfair tables are back open again during the morning shift.

Playtech have introduced new viewing options for their live games lobby. Betfair casino was among the first with the new options in spite of having only recently launched a new large table format lobby.

Players can now choose to view the lobby in Default, List & Grid format. 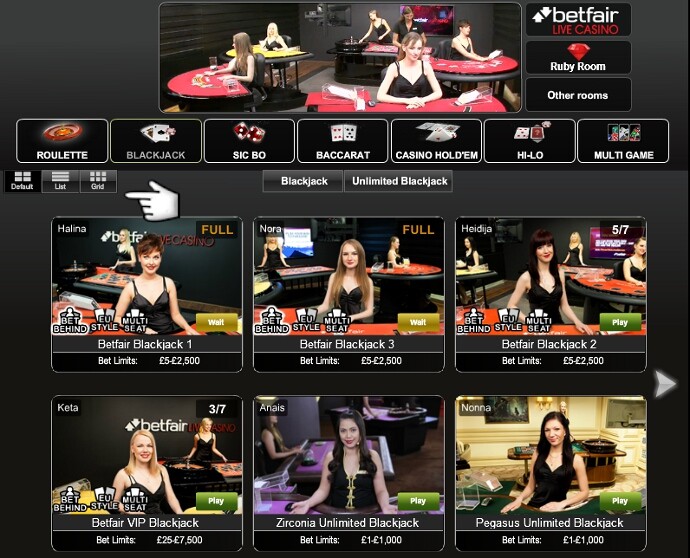 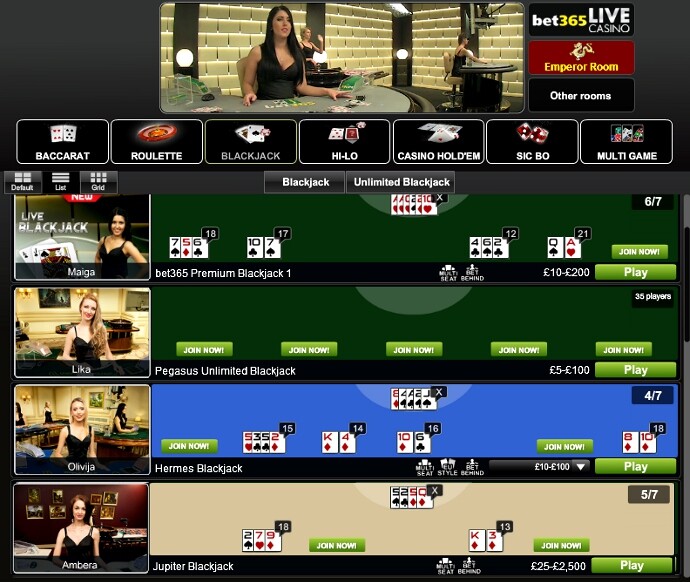 As table numbers increase I prefer having more tables visible at once reducing the need for excess scrolling/clicking. The big is better formats introduced in 2016 at Evolution and Betfair are in my opinion a pain.

As I said in May’s blog,

all very flash looking. But not the most convenient when you just want to glance over all the open tables

Frankly that was trying my best to be diplomatic. I found Betfair’s (in collaboration with Playtech) 2 tables per lobby screen totally stupid, all about show and nothing else. By the time I’d scrolled through all the tables I couldn’t remember the first tables I looked at and lost the will to play at Betfair again.

Thankfully it seems common sense has prevailed at Playtech with the latest viewing options for the live lobby. Fingers crossed I won’t be seeing more casinos adopting the uber-big table format.

In a similar vein, Evolution Gaming’s new lobby now comes with options (top right above tables) for changing the number of tables displayed on screen. Although with less game information than you have access to at Playtech casinos. Fortune looking grander than ever

Evolution’s high stakes Grand and Fortune blackjack tables have a new, more refined home in the Riga studio away from the other VIP tables.

The new studio setting makes use of the baccarat dealers and offers some variety to their day from the non-stop action at the baccarat tables. But not a total escape from baccarat for the dealers with the first peek of a new table in the background. Table limits vary from casino to casino. High rollers are well catered for at BetVictor with table maximums of £/€25,000 for Grand and Fortune blackjack. 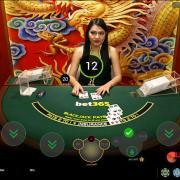 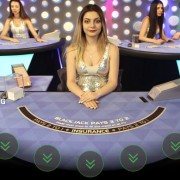 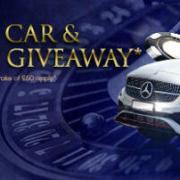 Playtech streaming in widescreen from their Sapphire room
0 replies

The upside of dormant account notices
Scroll to top