Counting cards playing live blackjack is largely ineffective due to the shuffle policies employed by live casinos (or rather the platform providers running the game).  In almost all cases you will find that cut cards are inserted mid shoe to prevent advantage players from being able to penetrate deep into the shoe with their count.

Below is a typical insertion from a dealer in the Evolution Gaming studio, during a session played at Unibet .  Consistent with the stated house rules, the card gets slapped about 4 decks into the 8 deck shoe.

It’s the same over at Playtech , Microgaming and indeed similar at all platforms we’ve looked at.

“After a shuffle is completed, all decks will be cut and the yellow cut card will be placed at a depth of approximately 75% of the [6 deck] shoe.”

The games are powered by Costa Rican based Global Gaming Labs who I know very little about.  But with an insertion policy like that I was keen to find out more!

Of particular interest was whether, and to what extent the dealers adhere to this policy in practice.  I’m no counting expert and any comments from gurus out there are welcomed, but I’d imagine getting use of 75% of the shoe each deal might get you into the sort of territory that could see the count start to become effective.

Below are a couple of recordings, each showing when the cut card is revealed and then where it is inserted in the  new shoe for the next deal.

The insertion’s a little tough to see clearly. The better gauge is a comparison of the full (blue) and discard (red) stacks to the right of the dealer.  By my estimations it looks more like players get to play two-thirds rather than three-quarters of the shoe.

See what you think…

Pros and Cons of Flat Betting in Blackjack 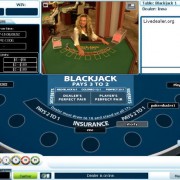 Live blackjack side bets - worth the bet? 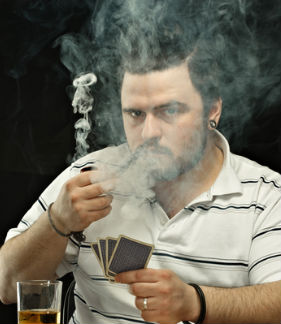 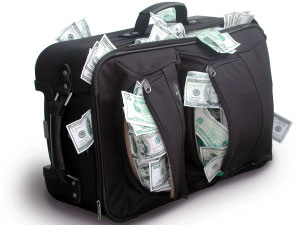